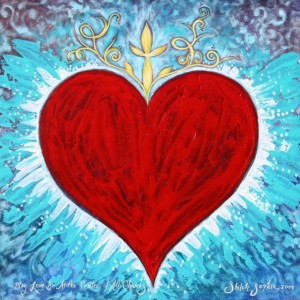 A dream foretold my Mother’s death. We all knew her months were numbered. Her heart was no longer functioning well, and although she was still able to live in her home, thanks to visits from my sister, Marlene, three times a day, Mom was weak. The last few months had been rocky with several trips to the emergency room.

In my dream, Mom was in a car parked in front of my childhood home. She was in the driver’s seat and the back door was open for me to get in. She turned around to tell me something but her voice was weak, and I couldn’t understand what she said. The scene then shifted from our quiet tree-lined street to the middle of a busy intersection, our car stopped in several lanes of heavy traffic. But, when the cars in front of us began to move, Mom pressed hard on the pedal and lurched backward! I closed my eyes, anticipating several lanes of traffic coming at us from either side. . . it seemed impossible that we would survive.

When I called Mom on the phone the next day, I was relieved to hear her voice. I told her about the dream, leaving out the part at the end, not wanting to invite in unnecessary concern if she felt ok. However, I confided that I wished I could have heard what she had said to me in the dream. “I love you, Beth,” she said. “That’s what I said.” It was a sweet thing for her to make up, the sweetest in fact.

It was my last conversation with Mom. The next day I was scheduled to board a plane to go to a conference, one that Mom was excited for me to attend. At the airport, I found myself inexplicably in tears. I called my sister just to make sure all was ok. She had just visited Mom that morning, and she was doing well. As soon as I landed in San Antonio, and turned on my phone, there was a message from my sister. Mom had grown weaker that afternoon, unable to breathe. The hospice nurse advised that it was safer for her to be under care in a facility rather than at home. Yet it sounded like she could be stabilized.

It was a long 15 hours or so, until the phone rang the next morning in the hotel room with the dreaded news. Even if there are months to prepare, it is a bodily shock to lose a parent. It became clearer to me then that Mom’s quick reversal in my dream was about her rapid departure. She was in charge, she was driving.

Two years later, as the date arrives, my siblings and I still feel our great loss. I can’t imagine that we will ever not miss our mother. We were lucky to have her with us for so long. My grief was long and deep. I sense that Mom is in a state of spiritual happiness, which is comforting. When she visits me in a dream, which she does from time to time, it is a pleasure to see her.

I’m grateful for my dream which provided the opportunity for her to speak those words to me. I can still hear them if I listen back, and listen closely. I hope I can always hear her voice, that exact intonation, those perfect words.

6 thoughts on “Those Perfect Words”