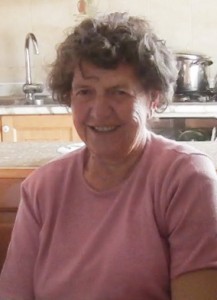 Last Friday a good friend died. Carmela Moser was the first person I met in 1980 when I set out to find my father’s relatives in Trentino, Italy. I was on a bus, clearly a traveler with my backpack, headed to the little village of Faida di Pinè, where my grandfather was born. Not many foreigners, and probably never any Americans, rode this bus. The woman on the bus was curious. “I’m searching for my relatives,” I explained in my best Italian. When she learned my cognome was Moser, she said, “Io sono Moser! Vieni a casa con me!” “I am a Moser! Come home with me.”

We spent the next couple of hours listing our families’ names and birthdates, searching for a connection. I explained that my grandfather was Giovanni Moser and had emigrated to the US in the early 1900s. She too had a relative with that name who emigrated about the same time, but ultimately we determined they were not the same person. I learned that most of the people in the village of 500 or so people had the surname of Moser, and that Giovanni was a common first name. After some thought she said that, although we were not related, she knew who my cousins were and where they lived. She directed me to the village of Cirè, where she said my relatives operated the sawmill. I got back on the bus, and sure enough, later that day met Onorina Bortolamedi, the wife of my Dad’s first cousin. Carmela, with her vast knowledge of the cultural history of her village, gave me the gift of locating my father’s family.

The seeds of a long relationship were planted that day. I have visited her several times over the decades. Carmela’s two children, Emanuela and Alfonso, were teenagers when we met. Now Emanuela has teenage children of her own. Alfonso chose a religious path; he has been able to live and work in the city of Trento, not far from his mother. We’ve remained friends and proclaimed ourselves as cousins.

In 2009, Carmela, and her sister Hilda, agreed to be interviewed when I was doing research for my dissertation on the folk culture of Trentino. I was particularly interested in women’s lives, stories, and history. We sat for long hours at the kitchen table while they provided precious details of their everyday life growing up. Carmela shared plant remedies, recited old prayers and songs from memory, and described all the religious festivals. Afterwards, we walked together arm in arm to the nearby hamlet of Prada where my grandfather was born. I drank some water from the fountain; we visited with the locals before returning to her home. My grandfather once sold her grandfather a parcel of land, she said, for growing vines.

We last saw each other when I visited Trentino last fall. Alfonso invited me to Faida to his mother’s house and they surprised me with an abundant birthday lunch, complete with homemade Trentino specialties made by his sister, pie for dessert, and gifts. He and his sister sang a jazzy rendition of Happy Birthday that made Carmela laugh. Carmela was discouraged from her loss of eyesight and discomfort from her previous surgery. Yet her faith was strong. Alfonso, her son, had recently traveled to Rome with a group where he met Pope Francis. He had told the Pope about his mother’s strong religious belief, but also her physical suffering. Two weeks later, she received a personal letter from the Pope, which she brought out and let me read aloud. It was precious to her, and I felt honored to read it. He addressed her as “Cara mamma Carmela,” dear mamma, and acknowledged her suffering from her blindness. “But your eyes see already now, because your great heart, that loves Jesus so much, sees what others don’t see.” After other words of encouragement, he ended by asking her to pray for him.

Carmela would have been 81 years old on Sunday. I know that her children and grandchildren, her sister, and other relatives will miss her. I feel lucky for our chance meeting. There is some link to my past that I can feel is missing now.

If I listen, I can hear the cadence and tone of Carmela’s voice in my head. “You are a Mosèr!” she had told me when I interviewed her, placing the accent on the second syllable. “Chi non è Mosèr non è da Trentino,” she proclaimed, meaning that if I didn’t pronounce it Mosèr, I was not from Trentino, but from another country. That little mark over the “e” is precious to me, a gift of cultural specificity from Carmela about my heritage, along with so many more.

Thank you, Carmela, for taking me home with you so long ago and for all you have shared with me since then. I shall miss you.