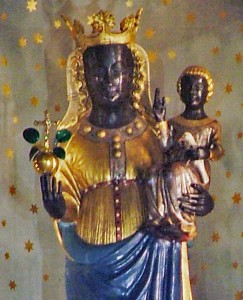 Twenty years ago today, the Black Madonna lifted her veil and allowed me to “see” her for the first time. One might say it was a chance encounter but the details suggest otherwise.

Having taken a sabbatical from my engineering career, I was in northern Italy for an extended stay, feeling called there by my ancestors to do genealogical research. Shortly before I departed, I happened to read a book, No Pictures in My Grave by Susan Caperna Lloyd, which referenced a Black Madonna. Although I had been raised Roman Catholic, and was certainly familiar with the Virgin Mary, I had never heard this title before, or seen images portraying the Mother of God with dark skin.

On that life-changing day, while looking at the atlas, I noticed that there was a Sanctuary to the Black Madonna not far from the airport at Milan, where my husband and I were dropping off a family member. I felt the pull as we drove into Biella, Piedmont, and up towards the Sacro Monte where the Black Madonna of Oropa resides.

Once there, as I ascended the steps into the large enclosure of the sanctuary, the views of the mountains and sky were sweeping. In the piazza, there was an octagonal stone fountain with metal cups hanging from chains for communal tasting. Later I learned it holds waters from the nearby Oropa River attributed with healing properties. The image of the Black Madonna is venerated in a small chapel known as “the old church” which is visibly built upon a large rock. Inside, at the front of the chapel behind the central altar, the carved wooden statue of the Madonna stands under a marble canopy. Her face and hands are dark brown. She is dressed in gold and blue, a child-sized adult seated on her left arm, secured by her large hand. Yet, as I gazed upon her that day, I was the one who felt held and beheld.

As the afternoon sun started to disappear behind the mountains, I realized that we needed to depart soon. We still faced a long drive to return to our apartment in Trentino that night. However, as I stood in the piazza at the center of the sanctuary, inexplicably, I was in tears. I did not want to leave. What was this feeling about? Who was I in the presence of?

“Just a little longer,” I requested. In one of the gift shops, I purchased a small booklet as a guide and remembrance. I raced around the vast grounds to see the large upper basilica and to find the chapel of the rock of life, said to bestow fertility. Finally, it was time to go. As we left, I made an inner promise to learn more about this image that could evoke such a powerful response and this place that could attract so many pilgrims.

So many seeds of the future were planted that day and during that six-month journey, offering experiences that would grow into my passionate research of the Black Madonna, and later into a doctoral study of the spirituality of my ancestral culture.

It is with great gratitude, then, that I begin sharing stories for this blog on this day.

3 thoughts on “My Eyes Are Opened”